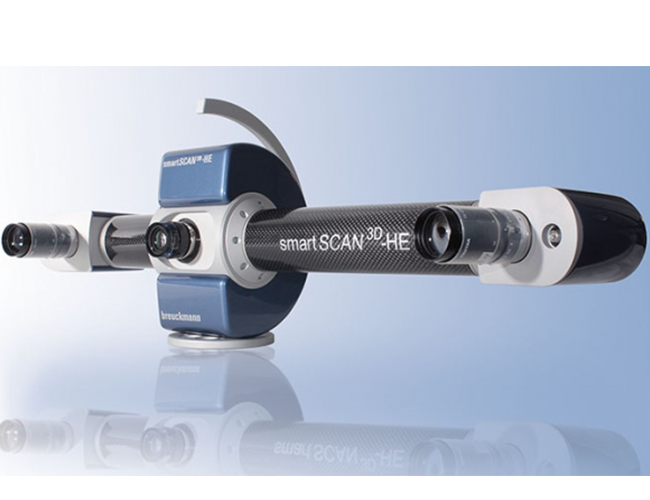 “So far many companies have given up on 3D scanning because of the cost of the special software needed for post processing of the scanning data. However, by using the ScanTo3D module in SolidWorks, they can solve many scan tasks avoiding the costly investment in expensive software dedicated for post processing.”

So far the interest in using 3D scanning among Danish companies has been limited but is now growing quickly as they discover the potential benefits. At the same time only a few SolidWorks Premium users has discovered that they actually can import and process 3D scan data directly in their CAD software, explains Søren Kvejborg, one of the leading specialists in 3D scanning.

The last four years Søren Kvejborg has been the owner of the one-man consulting firm Kvejborg ApS, based in the village of Koldby in the Nothern Jutland region of Denmark. Kvejborg ApS specializes in 3D laser scanning and measurement, Reverse Engineering and robotic solutions. The company is also selling 3D scanners, measuring machines and 3D printers as well as specialized software.

“So far many companies have given up on 3D scanning because of the cost of the special software needed for post processing of the scanning data. By using the ScanTo3D module in SolidWorks instead, they can solve many scan tasks while avoiding the costly investment in expensive software dedicated for post processing,” explains Kvejborg. He adds: “If you want to use specialized scanning software, it is necessary to continuously keep both the software and the knowledge about how to use it updated and this is too big an effort for most companies. With the ScanTo3D module, they can just use the CAD software they are working with every day instead. That is a huge advantage for them.”

Søren Kvejborg is an experienced user of SolidWorks and has been using the CAD system intensely ever since he founded his company. He estimates that 80 percent of Danish companies in design and manufacturing today are using SolidWorks: “My company would not have been where it is today without SolidWorks, and the software has in fact been the foundation for my business. I have not yet come across design tasks I could not solve with SolidWorks. The CAD software also makes it much easier to get into a conversation with potential customers, because they typically know the CAD software on beforehand,” he explains.

Søren Kvejborg has high expectations that his expertise in using SolidWorks ScanTo3D to process data from 3D scans will give his company more business in the future: “When I recently spoke at PLM Group’s introductory conference about SolidWorks 2014, there were only a few of those present who knew anything about ScanTo3D, but after my speech there was great interest from many of the participating companies. They approached me to learn more about opportunities in both 3D scanning and the module in the SolidWorks Premium,” he says.

“After SolidWorks we don’t have to say no to customers because of too complex designs.”...

END_OF_DOCUMENT_TOKEN_TO_BE_REPLACED

“In retrospect, we should have introduced SolidWorks several years ago, but we feared the transition from a 2D drawing system to 3D CAD. The fear has turned out to be completely unfounded. We’ve got h...

END_OF_DOCUMENT_TOKEN_TO_BE_REPLACED

”SolidWorks is especially strong when you have to handlemany complex parts which have to fit together in oneassembly. We made a detailed and accurate design of therather complex structure of the lamp,...