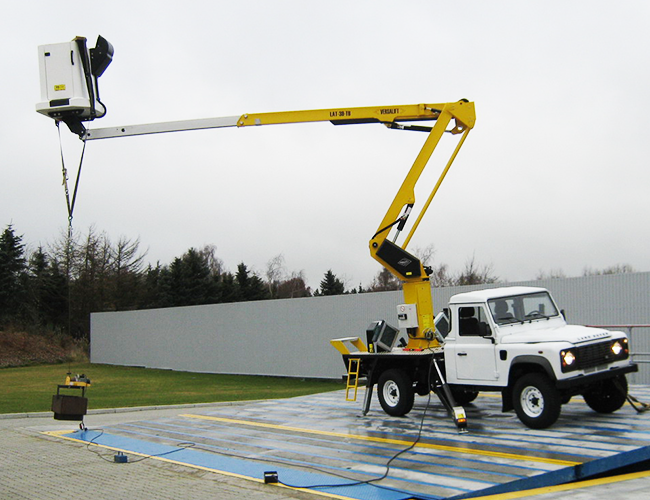 “We use SolidWorks products on a large scale to make design, simulation analysis, production preparation, inventory and marketing materials. We are very structured in our development work. Compared to earlier, we have been able to reduce development time by about 50 percent while at the same time developing increasingly complex designs.”

Time Danmark develops, manufactures, services and sells vehicle mounted lifts for electricity providers for tasks such as changing bulbs in street lights and many other tasks in areas such as the building sector. The company needed to speed up the development of new and more advanced lifts for mounting on vehicles such as vans, pickups and cars and trucks. This required streamlining of the development process.

By using SolidWorks, SolidWorks Simulation and SolidWorks PDM, Time Denmark has managed to decrease the development time for its vehicle mounted lifts dramatically.

Time Denmark is using seven SolidWorks licenses of which two are Premium licenses. In addition, the company has recently bought a SolidWorks Simulation Professional license and the complete system for product development is tied together by the PDM system SolidWorks PDM.

The use of SolidWorks products has meant significant savings explains Martin Adamsen: “3D design is much faster than 2D, which we used earlier. With 2D we needed more people in both development and other functions, so 3D has directly helped to save labor costs.”

Martin Adamsen also points out that by using SolidWorks, Time Denmark has been able to increase the reuse of portions of existing designs in the designs of new lifts, which has reduced development time for new products.

Lighter and stronger structures are crucial for Time Denmark. As the lifts are mounted on vehicles they can not be too heavy. SolidWorks Simulation is playing an important role in the creation of lighter and at the same time more robust structures: “We primarily use simulation to simulate and analyze the shear strain and fatigue of structures in order to optimize weight and strength,” says Martin Adamsen.

A big part of the design work is done using SolidWorks’ Sheet Metal module. The lifts consist of a large number of sheet metal parts, which are pinned together. According to Martin Adamsen, the use of the Sheet Metal module means that the parts always fit together, which means that the number of prototypes have therefore been reduced from typically three to only one: “With 2D design we lacked the possibility to be able to unfold sheet metal parts automatically, which meant more laborious work, more possibilities for mistakes and the need for more prototypes. Now the prototyping phase is much shorter.”

The PDM system is managing all information related to the construction work, but also plays a major role in the production preparation. The system automatically generates PDF documents with manufacturing drawings and DXF files used by subcontractors for the automatic laser cutting of sheet metal parts.

"We can do the same tasks in one third of the time we previously were using. With SolidWorks Composer the total time spent on the visualization tasks has been reduced even by up to 60 percent for both...

END_OF_DOCUMENT_TOKEN_TO_BE_REPLACED

“In retrospect, we should have introduced SolidWorks several years ago, but we feared the transition from a 2D drawing system to 3D CAD. The fear has turned out to be completely unfounded. We’ve got h...

END_OF_DOCUMENT_TOKEN_TO_BE_REPLACED

”It’s been an almost overwhelmingly positive experience using SolidWorks in the development process. We have been able to test our ideas together with end users and adjust the product based on their f...